Yoshio is an old friend of Umehoshi Masashi and Umehoshi Yasushi.

Mori Yoshio attended Suzuran at the same time the Umehoshi Brothers did. Knowing the twins since Middle School, Mori and his friend Yashiro Keiji, helped create the Umehoshi-Gumi

After a grueling battle against the combined effort of the sophmores and seniors of Suzuran, the Umehoshi-Gumi found itself alone at the top of the school.

During their reign, a freshman named Aoki ruined it all when questioning which of the Umehoshi Brothers were was the strongest. Constant battling caused by Aoki's question between the brothers, split the faction in two.

In his senior year, while walking home from school with Masashi and Matsuoka Nao, they were jumped by Housen's Nikaidou Takuya and others with pipes and taken to the park to lure out Yasushi.

When the younger Umehoshi brother arrived he KO'd Nikaidou with one hit shocking everyone in attendance.

After the KO, Mori told Yashiro he heard Yasushi say to Nikaidou "There's only one man in this world that can beat Umehoshi Masahi, and thats ME dumbass!"

Yoshio is now living a happy life as a long distance truck driver with 5 children. 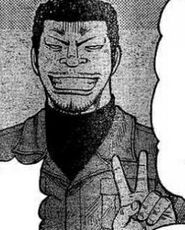 currently a long distance truck driver
Add a photo to this gallery
Retrieved from "https://crowsxworst.fandom.com/wiki/Mori_Yoshio?oldid=17542"
Community content is available under CC-BY-SA unless otherwise noted.